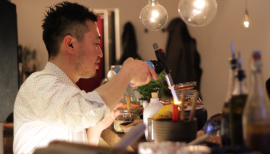 Yuya Kikuchi, the head-maestro, was born in Zama, Kanagawa, Japan. His parents being from farmers in North east of Japan, he was given the opportunity to embrace freshly harvested vegetables from early in his childhood. Though having inspirations to be a professional footballer until high school, he gave those up for his growing love of food and Japanese-styled cookery.

After graduating as a professional chef, his career as a chef began from the restaurant Tagawa, a long established and leading Japanese eatery in Brussels. Upon returning to Japan, Yuya went to Osaka to re-learn the essence of Japanese food from the scratch. The dedication to his craft paid off, as he qualified to attain the most challenging food-license in the world, called Fugu (Blow fish) cooking.

Yuya then travelled to Australia, working at Kamogawa, a well known restaurant from Ginza, Japan. Fascinated by the overflowing creativity of the chef at the time Mr. Nobuyuki Ura, Yuya found further inspiration and expanded his skill-set.

In April 2007, Yuya came to the UK, with the ambition of introducing his own brand of cookery. Experiences of working at the famous Mitsukoshi Department store in Piccadilly Circus, Yuya launched Kirazu. A restaurant specialising in general Japanese food, based on Japanese Kaiseki Cuisine in April 2013.

With his vast experiences in working in overseas, Yuya’s skills have developed and matured in a similar way to the dishes he serves.